The image of Africa was re-made in the long nineteenth century. By the end of that century, Africa was seen as the ‘Dark Continent’, supposedly in urgent need of being ‘civilised’ by European colonizers.  But of course Africa had its own encounters with globalization much earlier. In fact, Africa was integral to that process from the very beginning, most intensely in the form of the West African transatlantic slave trade, which from the late 15th century until the mid-19th century provided the labour for Latin American silver mines, Caribbean sugar estates and North American cotton plantations, to name just three examples. It is perplexing to note that, as Africa became ever more strongly connected to the wider world in the 19th century, both contemporary and latter-day European observers ever more strenuously denied that these connections existed, characterising Africa as a place isolated from global change.  It is also perplexing to note, how little is actually known about the effect of this process on Africa itself, be it in terms of economy, society, politics or religion. This raises the question, what did globalization look like from an ‘African’ perspective, in short: globalization as it appeared from the inside out rather than from the outside in. In order to find answers to that question, the workshop aims to examine transformations in slavery and methods of production, changes in structures of knowledge and belief systems, and alterations in patterns of political authority and modes of violence. 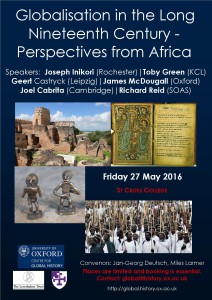